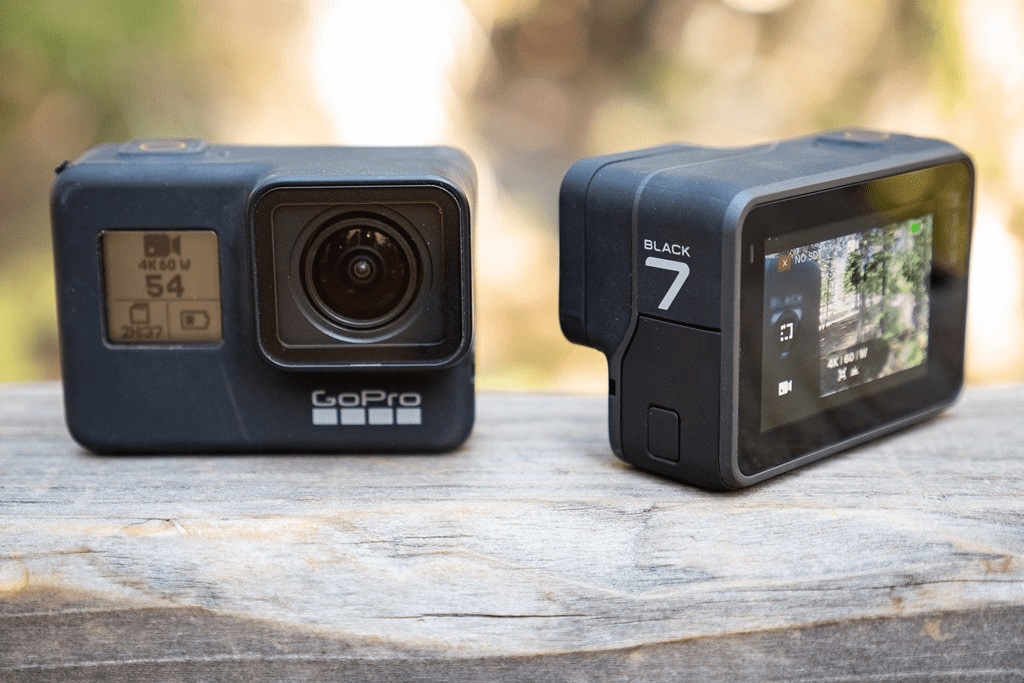 You may be wondering, what are the differences between the Hero 6 and Hero 7. Are the camera brands the same in terms of quality, action, and performance? Is it that one is superior to the other?

The GoPro 6 has a lightly ribbed texture around the body and the microphone holes on the top and side appear to be a bit larger on GoPro 7. It also has a different grid shape over the microphone at the bottom. The two camera brands have a bit different shades of dark gray color but the GoPro 7 is actually black in color. On the sides, the model number is obviously and clearly printed.

So in the comparison of both textures, the two cameras are basically the same, with only minor and insignificant differences. Even from the outer view, the cameras are similar. They possess the same weight, same dimensions, same buttons, same compartment doors, and same screens. The two brands also have been well equipped with water resistance.

For GoPro 7, however, there is an improvement, which is an added advantage. The microphone membrane has been completely modified and redesigned to enhance the quality of the sound.

According to users of the GoPro 7 camera, there is a brighter mid-tones, as well as a more natural bass. Which makes the camera more trendy and modern to fit customer satisfaction, happiness, and the desire for improved technology and better products.

For the first time ever, the GoPro 6 is a camera that could shoot in 4K owing to this nifty and novel addition.

4K video refers to a display with at least 8 million active pixels. The resolution you’ll see on TVs that support 4K is 3,840 by 2,160. For cameras, the resolution is 4,096 by 2,160. Compare that to the previous standard – HD, which was 1080p (1,920 by 1080). It’s easy to see that the resolution of 4K is around four times that of the old HD standard. 4K is much sharper and results in higher clarity. Of course, this is assuming that you both own a display that supports 4K and have native 4K source material in order to watch it in that resolution

This can be pursued at a speed of 60 frames per second. This is a biggie for you if you are a professional videographer. An advantage you should explore!

Another apparent improvement performed on the GoPro 7 relates to its user interface. The company used Public Relation as a tool by collecting data on how customers interact with the menu of the device. The company also made the brand more accessible. A new button designed in the camera to introduce short clip mode has also been added, and it limits videos to 15 or 30 seconds in length.

The GoPro 6’s battery capacity is not pleasing at all. According to the company’s official statement about the GoPro 6 camera, the device (untouched) lasts for under two hours, more specifically one hour and 40 minutes. Thus in its utility, it drains off barely in one hour of its operation especially in the times when the weather conditions are unfavorable.

Unfortunately, the battery span of the GoPro 7 is not really different as it is not pleasing as well. No improvement. What this connotes is that the compact and portable nature of this brand simply cannot meet up with quality standards. To avoid this kind of embarrassing disappointment and for the sake of professionalism, always have a spare battery in order to replace the battery inside when it runs out.

The cost of the GoPro 7 is entirely different. It was launched with the same price tag as the discounted GoPro 6. The device possesses an improved value at the same cost as its lower quality predecessor. The new model is now well recommended and approved by all and sundry, over the prior GoPro 6.

The GoPro 7 Black also have two less expensive brands: the GoPro Hero 7 Silver, and the GoPro Hero 7 White respectively. The former retails for around 299 dollars, while the latter can be yours for approximately 199 dollars. It is, therefore, more affordable.

Electronic image stabilization (EIS) is an image enhancement technique using electronic processing. EIS minimizes blurring and compensates for device shake, often a camera. More technically, this technique is referred to as pan and slant, which is the angular movement corresponding to pitch and yaw.

The EIS technique may be applied to image-stabilized binoculars, still/video cameras, and telescopes.

GoPro 7 has an improved Hypersmooth system, which places it way above the aptitudes of its forerunner.

GoPro 7 is equipped with a very powerful and capable processor than the brand had ever integrated into a product before. The silicon has been named GP1 by the company. For GoPro 7, however, the processor in the GoPro 7 is the same GP1 the company designed to replace the already outdated ones that came prior to GoPro 6.

The GP1 has been crafted from the ground up for the unique needs of GoPro cameras. Doing so offers increased control in how GoPro tunes its image processing, delivering the distinctive GoPro look, at a level of quality previously impossible from a HERO camera. Beyond that, GP1 allows GoPro to perform advanced image computation, carrying the brand forward to enable more intelligent cameras and features.

The GoPro 7 is higher in value: both monetary and in terms of the benefits that come with it. The robust photo and video quality modes are second to none. It is unbeatable and top notch. Over and above the GoPro 6, the newly launched GoPro 7 comes with additional innovative features which have improved beyond measure, the quality of the GoPro camera brand and that makes the GoPro 7 camera the better alternative and preferred choice over GoPro 6.